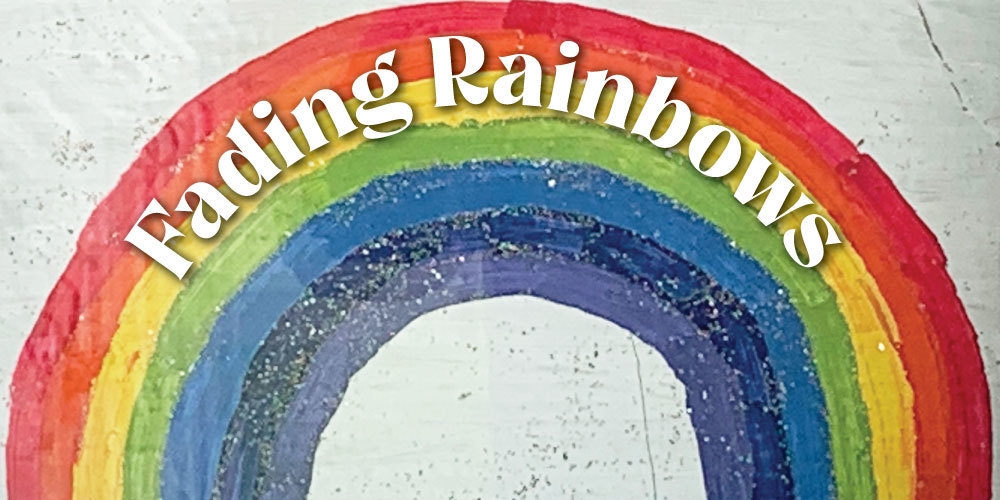 What do you do when the rainbows begin to fade? Because they have been there since March, bravely proclaiming that everything is going to be ok, but right now it’s not really ok, and it isn’t getting better really at all where I live – maybe where you live it is, but not in this city – that racks up cases and deaths and horror stories emerge from our senior homes and the hospital beds are almost all full now, and the cracks are beginning to show and governments are starting to criticize instead of co-operate, and really “Ça va mal - pas bien” if we are all honest about it. And people are full of frustration that they spew out all over the place on the internet, and they disagree with one another about what should be done, and I get it. We are in the same storm and not the same boat and so we all are reacting differently, but do we have to be so mean to one another?

And the rainbow in my window that sits there day after day that I painted a lifetime ago is paling in the sunshine but it doesn’t feel like sunshine inside my heart or my city and I wonder where this is all going and if it really is going to be alright and if so, when? And as my friend said yesterday on Zoom – I am – well, I think we all are – itching to get back to the way things were… What a perfect description of the state of my soul. When we itch, only a scratch will do, won’t it? We long for one solution, one good go at that spot to relieve it. Well, I’m itching and only one thing feels like it could solve it right now and that would be for all of this to go away – this virus, and fear, and people dying, and the worse economic recession perhaps ever – and let us just live like we did God!  Please.

But God seems a little silent right now. And we pray and we intercede and I have been a part of worldwide, country-wide, province-wide and local prayer meetings and we are pouring out our hearts, confessing our sins, believing in miracles and so far the answers are just trickling in a little here and there, but no great movement, no massive breakthrough spiritually or physically. And it is hard to persevere, and I realize again how my western Christianity lacks “stick-to-it-ness” and I don’t think I am the only one. I am so use to the comfort, the answers I can find myself, the no need for a real personal theology of suffering because honestly, suffering has been pretty remote in my life when I compare myself to brothers and sisters in Christ who live across the ocean. I want God to answer yesterday, and when I don’t have a fresh word for today, I begin to worry and fret and I find it hard to stand on what he has already said and not be moved.

And honestly, I am a little embarrassed that I can feel so defeated in as little as two months of all of this nonsense.

But that rainbow is still in the window and I am going to have to find something deeper than a catchy “Everything is going to be ok” kind of phrase to relieve the itch and burn of my soul.

I look again– at the rainbow itself - cause the phrase we made up, and we can drop any time really, but the rainbow is not our idea, that one came from someone far greater.

When I think of the rainbow, I think of the sun shining out after a cloud burst – something furious and dark but over, really in a moment. But the story of the first rainbow didn’t come after a little cloud burst, it came after 40 days and 40 nights of the heavens and the earth breaking forth in flood and washing over the earth in a torrent wiping out every living thing. And the rainbow was a promise – a covenant – between God and every living creature on earth – that there would never again be a flood that would destroy all life. Powerful. A God word, God’s love written in the sky, God’s remembering… God has spoken before and sometimes his answers only come after a rough shaking.

And there is another rainbow in the Bible and it might be key to understanding these times - an eternal rainbow in heaven. John saw it when he was transported there by the Spirit…God on his throne, and a rainbow that shines like an emerald encircling the throne. And that rainbow speaks to me of God’s character, his eternal nature, his everlastingness, his sovereignty and when I think of that rainbow, I know there is no fading, no wearing out in the sun with a trite saying that isn’t cutting it right now. No, that rainbow surrounds the one that demands heavenly creatures to continually proclaim over and over and over throughout all eternity “Holy, holy, holy…” never ceasing praise and worship because “he was and is and is to come” and everything lives and moves and has its being because of the one that sits on that throne surrounded by that glowing rainbow.

The itch settles a little.

Be still soul, hush now, quiet down. God is on his throne.  His promises can be counted on because his character, his utmost Holiness, is true. I can stand, persevere, even suffer if that should come if I keep my gaze on that rainbow and the one that sits beneath it.